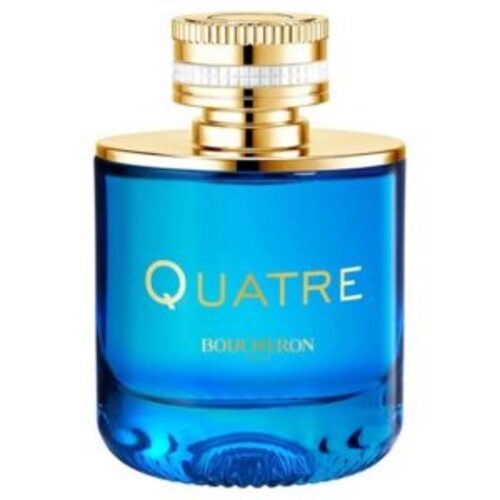 Since 1858, the Boucheron house has sublimated the elegance of the greatest women on the planet. The brand quickly established itself as one of the best jewelers in French heritage. Then, little by little, Boucheron also became an immense perfumer. Inspired by its jewelry, and more particularly a ring, the brand gave birth to a feminine fragrance called Quatre, in 2015. Since then, year after year, Quatre has been renewing itself and giving birth to new compositions. In 2021, the story continues and Boucheron celebrates the arrival of the Quatre en Bleu women’s perfume.

The history and origins of Quatre en Bleu by Boucheron

Initially, Quatre de Boucheron was not the name of a perfume but that of a jewel. This is a ring that combines the most emblematic techniques of Boucheron creation. To do this, it is made up of four different rings, each bearing the marks of a jeweler’s know-how. The Quatre ring consists of a “gros grain” ring, another in “mirror setting”, the “double gadroon”, and the legendary “clou de Paris” inspired by the Parisian pavé. Then, these four jewelry techniques metamorphosed into four scent accords, giving birth to an exceptional perfume named Quatre, in 2015. Since then, this fragrance continues to renew itself, deploying other variations of its scent, in editions of Quatre Intense, Quatre Absolu de Nuit, Quatre en Rose and Quatre en Rouge. In 2021,

The jewel bottle of Quatre en Bleu by Boucheron

Quatre en Bleu comes in a bottle identical to that of its predecessors. Sculpted in heavy and massive glass, this case is a guarantee of refinement. Undoubtedly, it belongs to exceptional objects. On the other hand, it changes its color and is adorned, as its name suggests, in a new brilliant blue hue. Its stopper is made from the famous Quatre ring, in a very luminous and sparkling golden accord. This ring never leaves the bottle and opens thanks to a system of opening by rotation. Much more than a simple jewel, the case of Quatre en Bleu is a true work of art.

Quatre en Bleu from Boucheron is a very refreshing and floral fragrance, which begins with tangy top notes of lemon, bergamot and tangerine. Then, this incisive start gives way to a generous and romantic heart of flowers. It contains in particular tuberose, rose and Egyptian jasmine. Little by little, it takes on a few woody notes of sandalwood and Akigalawood. Finally, a final touch of musk gives it a more animal and tempting side. The magic operates and the sensuality of this essence is undeniable.