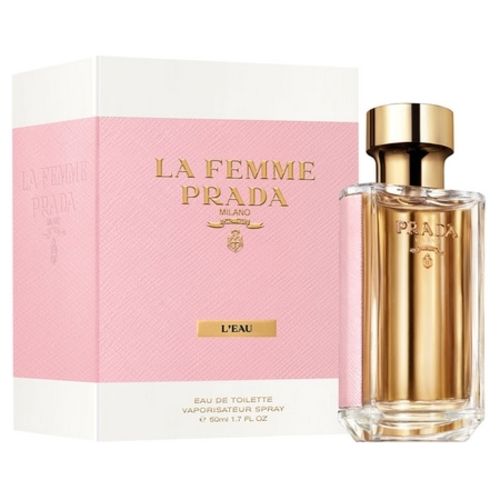 Since 2016, the Prada house shines thanks to two new scent pillars. Its fragrances are still fairly recent but have already greatly contributed to the brand’s success in the world of perfumery. This emblematic duo is made up of La Femme Prada, a perfume essentially based on the scent of tuberose, and L’Homme Prada, a juice more focused on the iris.

Today, the brand has decided to reinterpret its fragrances. On the women’s side, the new juice from the Italian house takes us to fresher but sensual territory. Focus on La Femme Prada L’Eau .

La Femme L’Eau de Prada is a perfume signed by perfumer Daniela Andrier. Indeed, it is already she who is at the origin of the previous versions of La Femme Prada. Born in Germany, Daniela Andrier did not seem predestined to one day win the world of perfumery.

In fact, it was primarily towards studies of philosophy that his choice was made. It took her a few years to finally discover her vocation as a perfumer. Its signature does not lie in a particular ingredient but rather lies in the timelessness of its juices. With her, it’s all about emotion. Here, she has chosen to reinterpret the major ingredient of the La Femme Prada collection , tuberose, and to bring it more lightness.

For this, La Femme L’Eau begins with an airy, fresh and clear scent of mandarin . This citrus citrus fruit is quickly relayed by a more vegetal note of frangipani. His heart, meanwhile, is more like that of his elders. It mainly revolves around a duo of ylang-ylang and tuberose. Little by little, La Femme L’Eau is gaining in character and depth. This fragrance ends with more woody accents.

The Prada L’Eau perfume bottle is dressed in pink

On the aesthetic side, Prada has also chosen to keep the silhouette of its initial bottle. Only its color and texture have been slightly transformed. It is a container made up of two parts. The first, its front face, is perfectly smooth. It adopts a particularly luxurious and refined golden hue. In opposition to this very architectural aspect, the bottom of this bottle is curved. It is covered with a texture of pale pink leather, a sort of nod to the world of Prada leather goods.

The La Femme Prada fragrance collection alone represents the quintessence of the brand. It defines an infinitely chic and elegant feminine universe. This juice of light and sensuality seems to have captured all the character and singular personality of Miuccia Prada. It is a fragrance intended for a woman of character, endowed with a strong confidence and an extraordinary spirit of initiative. It is also a compendium of refinement and brings together multiple ingredients of exceptional quality. From then on, his speech is unequivocal and its impact is timeless.