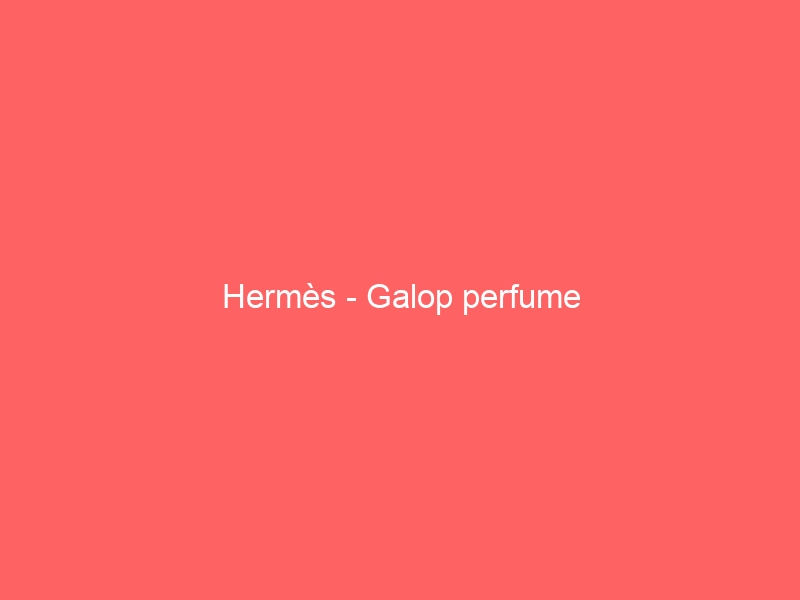 Galop, the new impetus of the house of Hermès

Hermès is a recognized brand that excels in several fields of activity such as leather goods, jewelry and of course perfumery. Also, his favorite sector still revolves around the world of horse riding. Much more than a simple red thread to Hermès creativity , the equestrian field has been a real passion since the birth of the brand. Thus, a good number of Hermès perfumes clearly refer to this sport. We remember in particular Calèche, Amazone or Robacar to name but a few. This time, Hermès presents us with something new. Prepare to welcome Galop from September 2016.

Hermès love for the equestrian sector

Hermès has always been a specialist in horseback riding, and for good reason … Initially, Hermès moved to the heart of Paris, in 1837, as a harness maker. Although times have changed, the artisans working for Hermès have not forgotten the excellence of unparalleled and ancestral know-how in the service of riding always concerned with perfection and performance. Hermès has therefore been supporting the victories of the greatest champions for almost two centuries. We thus find the saddles of the house during the most beautiful show jumping competitions. Likewise, Hermès luggage is an ideal partner for trips, formerly made in a horse-drawn carriage. Also, this love for this area comes in all the sauces. Before being the new Hermès perfume, Galop was even the name of a famous bracelet of white gold and diamonds. It was twisted and tied with a horse’s head. As you will have understood, Galop is not just a new fragrance. It is a concentrate of history and a part of personal heritage that Hermès offers us. Obtaining this new nectar would almost be like plunging us into the childhood memories of Monsieur Hermès or opening the yellowed pages of an old family photo album.

Galop, a composition by Christine Nagel

Also, it is not a surprise and it is indeed to the talented Christine Nagel that we owe the new Galop perfume. Indeed, it became the new nose of the Hermès house in 2013, succeeding Jean-Claude Ellena. Free and hedonistic, Cartesian and instinctive, it is a little of her contradictions and her lively and fiery spirit that we find in the new Galop perfume. This is contained in a bottle faithful to the Hermès spirit, in the shape of a stirrup. Its completely transparent surface lets us glimpse its limpid juice. Likewise, everything is carefully inserted into the hollow of a metallic curve. Finally, to enhance this container, a fine leather lace, an emblematic Hermès material, is attached at its top. On the scent side, Hermès is keeping its recipe very secret for the moment. However, we know that Galop will contain a very feminine and romantic facet emanating directly from the queen of flowers. Indeed, the rose will be placed directly at the heart of this composition. It will then be added to a more animal and sensual facet emanating from the leather. The whole promises to be particularly tempting and can only be an absolute success if we consider that it is signed by one of the most famous perfumers on the planet.